YouTube Famous: Is Video a Viable Growth Channel for Startups?

YouTube Famous: Is Video a Viable Growth Channel for Startups?

It’s not just YouTube, though. Influencers on Vine, Instagram and elsewhere have aggregated millions of followers on those channels too.

So the numbers are exciting, and video is clearly a promising medium for content distribution and growth. But is it really ROI-driven — and affordable — enough for startups?

500 Distro recently partnered up with General Assembly in L.A. to talk about video as a viable growth channel for startups, not just fancy brands with buckets o’ dollars.

Below is a brief recap. You can also skip straight to our video of the panel here.

How should STARTUPS think about video to drive growth?

Phil Ranta: Every brand needs to realize it’s hard to be a brand these days without also being an entertainment company.

The two go hand in hand. If you don’t have a social presence, then you’re missing out on a huge marketing opportunity: “I’m running this marketing campaign, and based on the followership that I gain from this campaign, my next one is going to be more effective.”

Step one is to figure out who you are as a brand and then what that looks like as entertainment.

Marcelo Camberos: It doesn’t even have to be only entertainment. It can be content-driven too.

If you’re selling life insurance or something that’s not funny or entertaining, you might not want to be on YouTube and Instagram, but you can still figure out what your brand is, and then identify WHO are the people who ARE LIKE that brand.

Then I would just invite them to your office or to dinner or to a party, find out what they’re doing and how you can help them and maybe work with them.

Evan Asano: At MediaKix we look at things in terms of a channel of influencers. There are YouTubers with millions of followers, and there are also people with 5,000 or 10,000 subscribers that also have loyal opportunities. There are opportunities all across the spectrum, it really depends on how much money you have.

Who has done a great job of leveraging video for growth recently?

Marcelo Camberos: Anastasia is a beauty brand that does an amazing job. She’s the brow queen. They’ve nurtured a very authentic posse — they’re just FRIENDS with each other. They’ve done a great job of simply engaging.

This works well here in L.A. A lot of the people who are influencers are right here in LA, and brands can connect via parties, via giving them products or tools or bringing them in as part of the family. It’s so much more authentic than when you’re paying for it. That’s not to say that it won’t work when you’re paying for it — especially if you’re thinking about building a program that you can scale — but I think starting out the brand that I would really call out is Anastasia.

Phil Ranta: It sounds weird… but I think Taco Bell is doing a great job with influencers and social.

They did one recently called the Breakfast Phone, where they give influencers a burner phone and said, we’re going to text you every day with something to share on social about Taco Bell, and at the end of the 30 days we’re going to give you something.

I would guess probably 80% of influencers flat-out said no, but the other 20% thought, hey this is a super fun game. People participated because they were just curious enough to know what the prize was at the end (it turned out to be a hoodie).

What attempts have been less than successful?

Phil Ranta: There was a car company that we recently worked with. They were doing a travel show, got a couple influencers to star in the show, but didn’t work on marketing with the influencers. They had big stars in it, but it was a tree falling in the forest. It was getting 500 to 1000 views per episode and they were clearly spending like crazy for that.

I learned a valuable lesson from that: discoverability has to happen first. You can make something really good, but if people have no way to view it that first time and then begin to share it and make that cycle start, then it might as well not even happen because there’s so much content on YouTube and it just disappears.

Andrei Marinescu: Big brands like Taco bell or car companies have huge budgets and aren’t necessarily ROI-driven because they’re brand building. For startups, especially early stage, where cash is not plentiful by the hundreds of millions, they have to be ROI-driven.

What are examples of companies that have done a great job running a video campaign that’s strongly ROI-driven? And how do you even do ROI in this world where it’s about “influencing” and squishy concepts like how many views you got?

How do you determine whether those views actually translated into signups for your email list, or registrations on your site or subscribers or people just buying whatever your service is? How do you bridge that gap?

For EVEN MOAR 500 Distro — come see us LIVE AT Weapons of Mass Distribution, our once-a-year conference on startup growth coming to SF on May 1. Register with code 500READER to get 15% off your ticket. 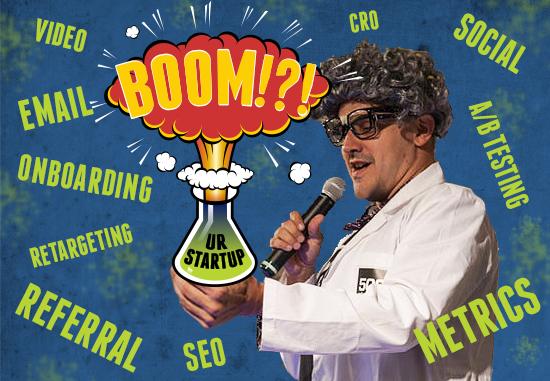 MemeChat is Making People Laugh and Getting Meme Creators Paid

Amit Bhatti
Memes are a huge part of the culture of the internet, especially for Millenials and Gen Z.  Ever try making a meme on your phone though? Creating a meme on the fly and customizing it to the mo...

The Inclusion Impact Index Project: A Call for Founders to Participate

Andres Wydler
We know that entrepreneurs across the United States – women, men, Black, Latine, Veterans, LGBTQ+ and more – are contributing enormously to the success of our economy. But do we know how much? And ...

Roland Osborne
Even before the pandemic, 77% of men were dealing with some form of stress, anxiety, or depression and 40% said it would take thoughts of suicide or self-harm for them to reach out and get any help...