Excited to announce that 500 Istanbul is rebranding to 500 Emerging Europe!

From the very beginning, 500 Global’s investment thesis was anchored by a conviction that exceptional founders exist everywhere, not just in Silicon Valley. This contrarian bet led us to back great entrepreneurs around the globe. As of June 30, 2022, 500 Global’s portfolio includes 49 unicorns (public, private and acquired companies valued at $1B+), 40% of which are non-U.S.*

The thesis for 500 Istanbul revolved around investing in companies that leverage local tech talent but have global ambitions from the start. This talent arbitrage has helped create three unicorns in our portfolio and has earned us a strong reputation among current and prospective founders from Türkiye and beyond.

On the surface, individual Central Eastern European startup ecosystems–or what we like to call Emerging Europe–may look similar to those in other emerging markets, like Latin America, Africa, the Middle East or Southeast Asia. A closer look, however, reveals very different dynamics. We believe the absence of local population density and market depth pushes startups to shoot for global markets, instead of building local plays in the region. We call this the emerging talent thesis, as opposed to the usual emerging market thesis.

This is a model that has proven to work elsewhere, most notably in Israel and Estonia–the latter boasting the highest number of unicorns per capita in the world. This population paradox– where smaller populations drive more global-focused companies to emerge, exists throughout Emerging Europe, due to the lack of interconnectedness and regional expansion potential. We believe Emerging Europe has the potential to create dozens of unicorns every year and make the greatest leaps on the continent.

Excited to announce that we are rebranding 500 Istanbul to 500 Emerging Europe!

The road to Emerging Europe started with the creation of 500 Istanbul, which we set up in 2016 to invest in Turkish entrepreneurs. As I mentioned in my 2018 post, Turkish entrepreneurs shifted gears to focus on global markets to hedge against local risks, leading to a crop of technology exporting companies with defensible products that can scale globally. We have invested in great companies including Carbon Health, Insider, BillionToOne and Firefly, while building a local portfolio that in aggregate generates more than 95% of its $600M+ revenue outside of Türkiye and has raised $1.1B in follow-on funding–almost all of which from international investors.

As our strategy around finding globally competitive early-stage teams bore results, we realized that these dynamics weren’t limited only to Türkiye. Central Eastern European unicorn success stories are global from the outset. Since 2019, we have made investments in Poland, Ukraine, Romania, Greece, Bulgaria and Hungary, and we’re excited to see portfolio companies, such as Athens-based Plum, emerge as a key UK wealth-tech player.

As we move forward, the foundation of our strategy in Emerging Europe remains based on two major factors:

Central Eastern Europe, like Türkiye, has highly skilled engineers and developers, which makes the region a hotbed for IT outsourcing. As leveraging human capital is key to building globally competitive products, we believe tech companies from CEE are able to easily access and retain top-tier talent longer. Crucially, the number of people moving into these professions is growing, while tech giants such as DataRobot, Snowflake and Snap continue to build tech teams in Emerging Europe. It is a talent gold rush.

Rather than trying to connect all the distinct regional startup ecosystems in Emerging Europe to each other— as you would in other emerging markets —here we are connecting founders to mature tech markets, notably Silicon Valley. We believe if a startup partners with an investor that can quickly help link its product to a more mature, early-adopter ecosystem, the probability of success can significantly increase. 500 Emerging Europe is the only seed investor in the region with a strong connection to Silicon Valley, uniquely positioning us to find promising entrepreneurs and guide them towards global value chain and funding streams–just as we’ve done in Türkiye.

Emerging Europe will lead growth on the continent

500 Emerging Europe is determined to fuel ecosystem-building activities and bridge the region to more developed markets. That means diving deeper into ecosystems, deploying more capital and building a physical presence across the region. With this hyper-local and feet on the ground approach, supported by our global network, 500 Emerging Europe aims to become the natural first stop for early stage teams in the region with a vision for a global product.

Many may only think of the challenges that dominate headlines. The war in Ukraine looms large, just as the attempted coup d’etat in Türkiye did in 2016—the same week 500 Istanbul launched. Yet, this turbulence has pushed a new generation of founders to create market-independent businesses. The people here are resilient and the companies they build are robust – even “antifragile” in a lot of different ways.

500 Global has long bet on local talent around the world. With 500 Emerging Europe, we’re doubling down on that in a region flourishing with global ideas. 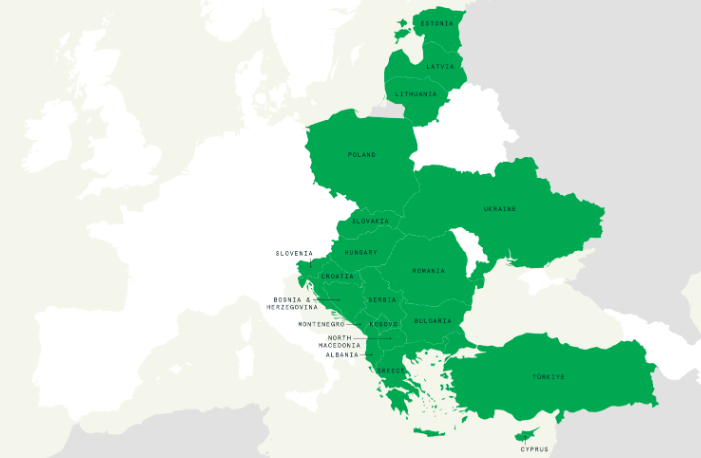