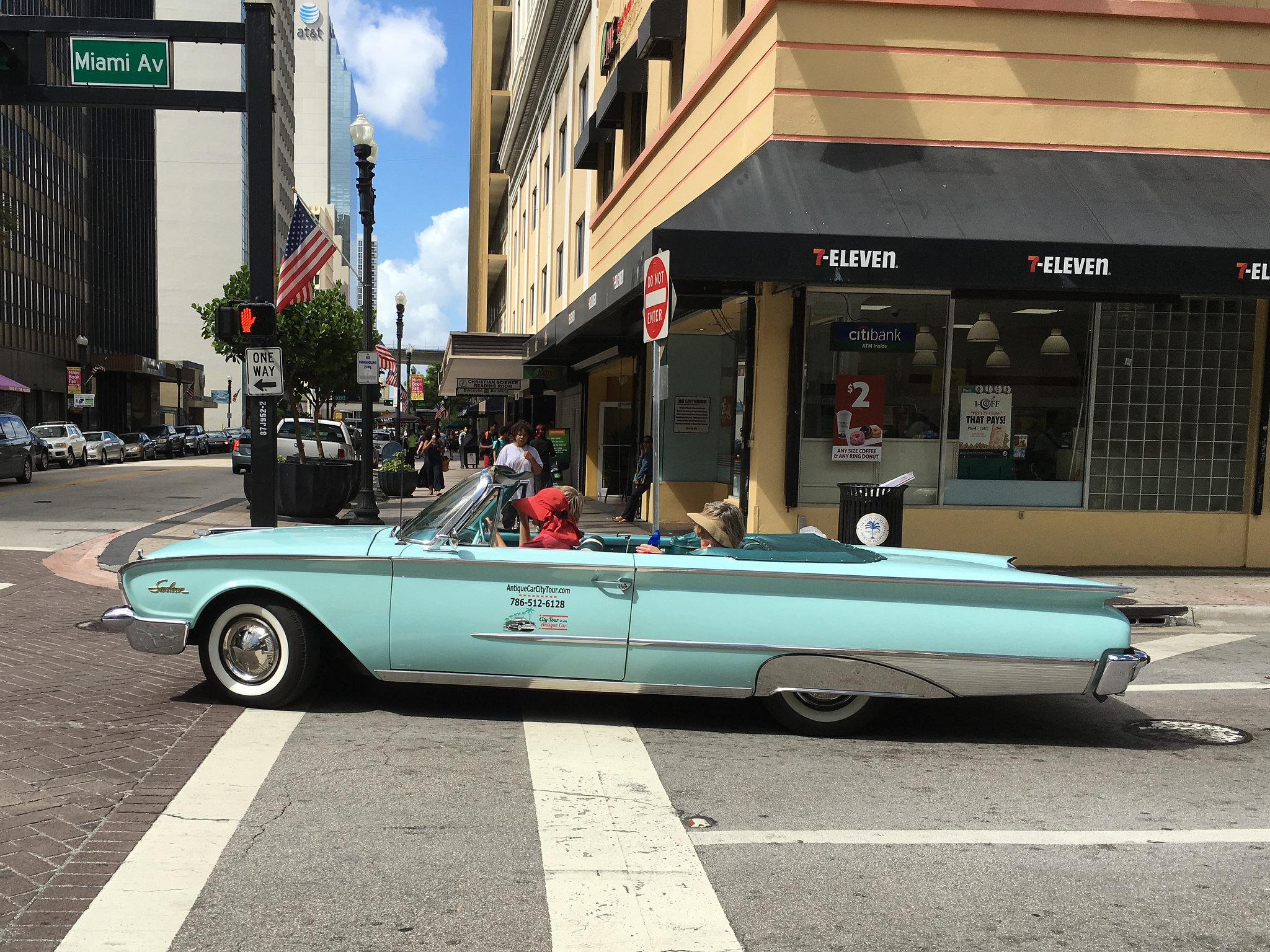 Few of us who live and work in the Bay Area hail from here, but we still have a regional bias; the Bay Area is the best. We enjoy moderate weather, natural beauty and diverse communities that produce culture so rich, we had to coin the word “hella.”

In 2013, Endeavor, a non-profit that supports high-impact entrepreneurs in emerging markets, opened its Miami office. With $2 million in support from the John S. and James L. Knight Foundation, Endeavor Miami offers entrepreneurs strategic advice, mentoring and opportunities to leverage the group’s network and shared knowledge.

“I don’t like to compare our ecosystem to others,” said Laura Maydón, Managing Director and CEO. “I always describe Miami as a teenager; we’re so young.”

“We are supporting 13 companies led by 20 founders,” she said. “We’re focused on helping entrepreneurs accelerate their growth.” Entrepreneurs have a plethora of reasons for moving to Miami, said Laura, but most cite access to customers, easy travel to Europe, the US and Latin America, the region’s relatively low cost of living and high quality of life.

“I think the companies that are very binary, that are going to either be a billion dollars or zero — are best suited for being in San Francisco, because that’s how they think about investment.”

Spear’s medical apparel startup is an Endeavor network company that began in Los Angeles a few years ago and opened a Miami office in 2015. “I was born and raised here,” said Trina. “I saw what was going on in Miami with an ecosystem that was being developed and nurtured by amazing entrepreneurs and investors. I wanted to build out our company in a place I was fond of, and also in a place that was more startup-friendly.”

“LA has a great startup ecosystem as well,” Trina noted. “But I love it here, and this ecosystem was developing.” She estimates saving about 50% over LA commercial real estate.

Brian Brackeen, CEO and founder of Kairos, a developer of human analytics software, moved to Miami about five years ago before briefly relocating to Silicon Valley to work for Apple, where he “caught the startup bug along the way.” After Apple, Brian started Kairos in San Francisco and went through the NewME accelerator program before bouncing back to Miami.

“We looked at five or six different cities: NYC, Philly, Miami, Austin, San Francisco and Boulder,” said Brian, who judged each on criteria like his employee’s COLA costs, personal and business tax implications, the number of angel investors and the population of PHP coders.

“We were searching things like AngelList, GitHub, different state web sites, then we took all that data and Miami was at the very top of the list in every important category,” he said. “Cheapest for our employees, and the best tax situation for the company and our workers. There’s a large number of PHP developers — a ton of talent — which you may be surprised to hear,” said Brian.

“I met Brian when I launched Endeavor,” said Laura, “and one year later, he was part of the Endeavor network. That, to me, is a sign that companies are growing. Companies that mightn’t have been ready two or three years ago are coming into our pipeline, so I see the ecosystem unfolding.”

Florida nabbed just $460.8 million in VC funding in 2015, compared to $862 million the year before. The comedown is due to a 2014 $542 megaround raised by augmented reality changemakers Magic Leap. The bulk of the funding awarded to Miami companies in 2015 went to three health-tech companies: MDLive ($50M), Modernizing Medicine ($38M) and Orthosensor ($22.9M).

“I don’t yet know where our strengths play,” said Laura.

“California has one angel investor for every three startups,” said Brian. “Florida has three angel investors for every startup, so there’s a large amount of early stage capital.” Despite the personal wealth, South Florida’s investor class is relatively new to tech, which necessitates ongoing education and outreach, said Laura.

Trina dismissed any notion that founders must live within an Uber ride of their backers. “I think it’s great if you want to meet with investors every day, but it’s very easy to hop on a plane and go have some investor meetings during the time that you’re fundraising,” she said. Ready access to capital can also create a reality distortion field for many founders, Trina added.

“I think that there’s overfunding in some of these markets where you feel like you have to raise more and spend more. I think there’s more discipline around your spending and raising when you’re outside of those cities,” she said.

Even when Silicon Valley likes the cut of your jib, they’ll still try to convince you to relocate, said Brian. “Those investors, thirty to forty percent of them will say, ‘hey, we can be more helpful to you if you’re in San Francisco. You’ve done a great job, really impressive, but if you want to get in the big leagues, you’ve got to come over here and play that game.’”

“I’m aware of three startups that did that… moved to San Francisco, and then all the developers they moved with them who were making $80,000 a year were poached, and they completely lost their dev staff,” Brian recalled. “It caused two of the three to fail.” The survivor returned to Miami, he added.

“This location has been nothing but helpful for the company,” he said. “We bought a company last year in Singapore; those people still work there. Other than acquisition, we’ll be hiring here.”

“I think that investors in general tend to be the laggards; once the opportunities are really evident, they will come,” said Laura. “There’s more and more local funding, but entrepreneurs need to supplement their rounds with money from outside.”

“Our team in Miami is really strong and very dedicated to our mission in a way that may or may not be true if we were building this in Silicon Valley or NYC.”

Because Miami is so PHP-friendly, Brian’s not challenged when it comes to onboarding new employees. Today, his firm has a 200-person waiting list for new hires. “Forty people on that list are from MIT,” he said.

“One of the reasons why PHP is more common here is because quite often schools are not teaching Ruby,” said Brian. “That’s something at code schools, versus traditional schools which are sometimes a little bit behind. For us, that actually comes out in our favor,” since Kairos is “just going in a completely different direction from a technology perspective.”

In Brian’s view, “it’s hard to hire a technical person in any city in the world. It’s hard in Milan, it’s hard in Akron, Ohio, and it’s very difficult in San Francisco, given the amount of folks who are vying for talent there.”

“I think it’s harder to find really good people in Miami, just because it’s still newer,” said Trina. “When you do find them, they’re way more loyal and harder working because they don’t feel like they have a million options around for getting in at an early stage company and really building something as a team together.”

FIGS’ Miami office is home to the company’s sales and customer service teams, “but our designers are not here, and our engineers are not here,” Trina said. “They work out of our LA office. You’ve got to know where the talent is.”

“I don’t know if I would build out our design and engineering teams in Miami. That being said, other companies have been successful doing that, not that we couldn’t,” said Trina.

“I talked to an entrepreneur today,” Trina added, “and her entire tech team is in SF. I think it works if you have really open communication and break up the team by function in a clean and clear way.”

“Growing and having an ecosystem of high impact entrepreneurs, that will attract talent in itself, because they will have higher needs,” said Laura, noting that Endeavor Miami’s network companies “have several models for talent acquisition: most of them have local teams, but some outsource.”

“There are certain specialties that might be more difficult to find locally, but I think that more and more people are coming to Miami to fill that skill gap,” she added. Wyncode Academy, another Endeavor Miami entrepreneur, does its part by offering coding classes in South Florida to residents who want to “get immersed in the Miami tech ecosystem.”

“I’m a firm believer that human capital is a free resource, so I don’t get too worried about whether you find it here or bring them here,” said Laura. “You want to work with the best talent, no matter where it is.”

“I feel like I’ve made stronger bonds in Miami than I have in any other city.”

“The other thing that’s unique about Miami is a cultural difference,” said Brian. “There’s this gold rush mentality: the best and brightest want to chase their dream in tech, and they move to California to do so, which makes perfect sense. It’s a very American, ‘go west, young man’ type of thing.”

“Given Miami’s location and proclivity to be very Latin, the culture is very different,” he told me. Instead of people leaving to seek their fortune. “it’s more like, now you’re old enough to take care of a family,” said Brian. “These cultural differences lead us to have people with Harvard-level skill sets and Stanford-level skill sets who stay in Miami because they have responsibilities. For that reason, we actually retain a much higher percentage of talent than other cities,” he said.

“Silicon Valley is very much about happy hour every night and foosball, and let’s have this amazing culture from a perks standpoint, but in Miami, I think it’s more about where are our goals, and where are we headed and how can we continue to make this work on a holistic level,” observed Trina.

“We don’t need to go to dinner together every night because we have families and we have friends and other outside interests, other than living and breathing the company. But at the same time, we’re all working together for a common goal. It’s not about perks and dinners and working until midnight,” she said. “It’s about loving your job and whatever you’re doing outside of your job.”

“We have fifteen employees and we’re doing a Series A right now. Hopefully, we’ll go to fifty in a year’s time.”

“One of the opportunities and challenges we have is to help entrepreneurs stay; depending on the specific vertical they’re in, they might find it easier or more synergy to be based in Silicon Valley,” said Laura. “Some of the entrepreneurs who’ve decided to go there — it’s because of funds, not necessarily because of the markets. I think there’s more striving to be based here.”

“I believe there are all the ingredients in Miami needed to grow the ecosystem , but there’s also a lot of work to do,” Laura said. “This is a long-term game and the ecosystem is putting all its parts together and growing, so hopefully, in a few years, I’ll be able to tell you a progress story.”