The 500 Accelerator in a Nutshell 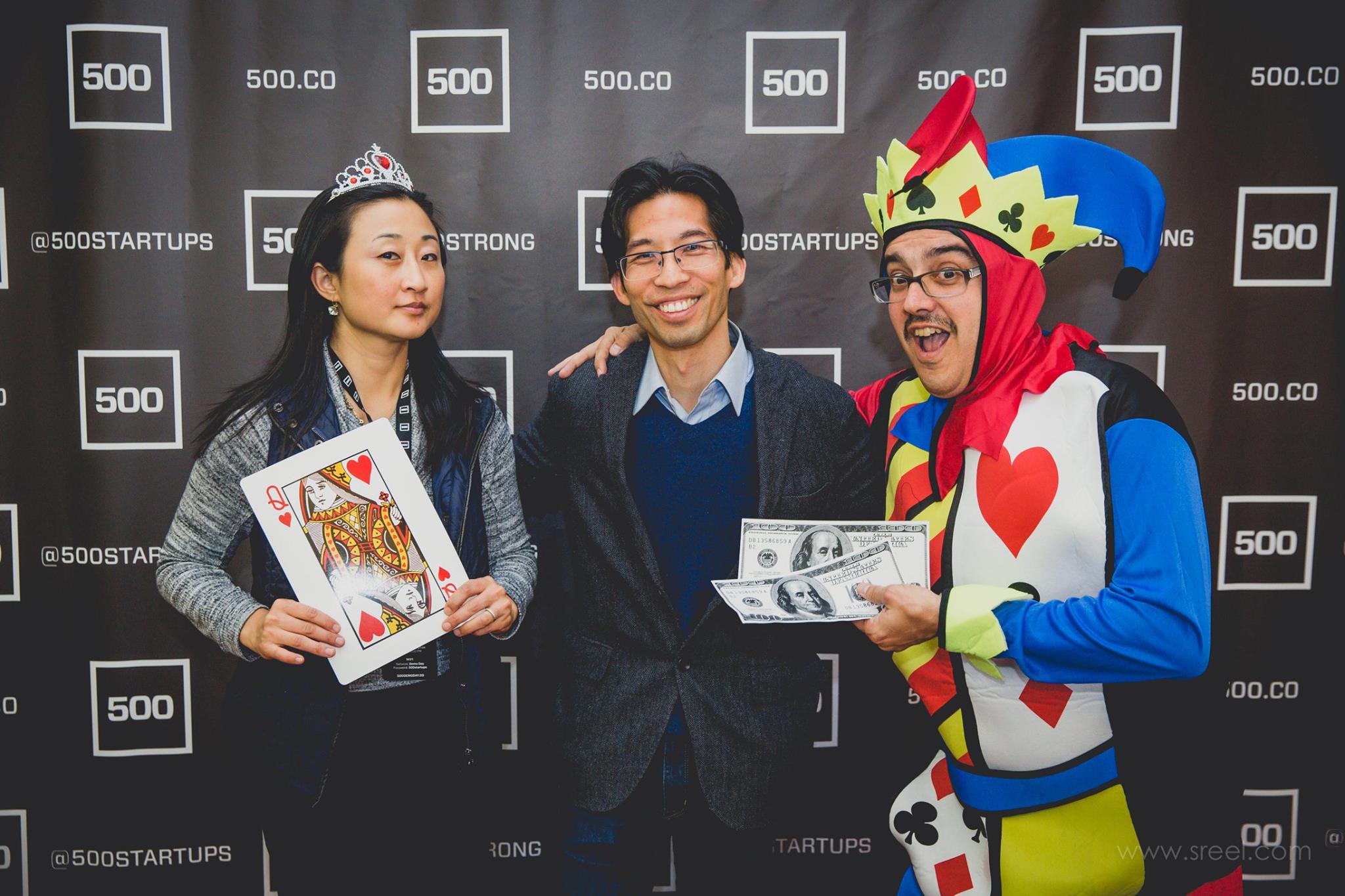 Today’s is the last installment in a series of essays by 500 founder Troy Sultan documenting his journey through the 500 Accelerator, Batch 16. Here Troy shares his closing thoughts on the Accelerator, and his opening thoughts for the considerable “Everything Else” that’s on its way.

It was 10pm on a Monday in November, two hours before the application deadline for 500 Startups’ 16th batch. Two months prior we were interviewed and rejected from Batch 15 — for good reason. We were too early.

The company was barely a couple months old and wasn’t ready to fully leverage the accelerator’s value. While aware of this, we interviewed anyway to learn what that value actually looked like, and if it would be relevant when we were indeed ready for it.

Two months later on that Monday night in the office, we were heads down GSD. My calendar interrupted, reminding me that applications were due at midnight for the next 500 batch.

I broke the productive silence and muttered to Wade for a quick sanity check. “We’re not interested in 500, right? Application is due in 2 hours.”

“But wait!” my brain said. “Lets torture ourselves by imaging a fictional scenario where we regret not applying at some point in the future!”

So I blurted aloud, “Imagine —just for argument’s sake — sitting in the 500 office a few months from now laughing with new friends, fist-bumping over big wins, having grown and learned in unimaginable ways, looking at each other asking, ‘Can you image if we didn’t apply?’”

While it’s feels impossible to fully capture in a blog post, I try my best to highlight our experience below.

Some lessons & wisdom we’re walking away with:

Other takeaways from our experience:

Our target customer changed. We went from selling into multiple customer types to one. This led to us refocusing our product roadmap and feature set, refining our sales and on-boarding process as well as our messaging. We’re more focused.

This changed the way we’re thinking about the business as a whole, which comes with it’s own challenges. Contrary to my broader point here, we’ve lost clarity on the company’s long-term vision as new learnings and opportunities came to light. We’re becoming more comfortable with not building the big vision now and focusing on the immediate opportunity in front of us as things will change.

It’s easy to build in isolation. Isolation from customers/users, friends and family and other entrepreneurs in the trenches. I’ve written before about thepsychological challenges of company-building and I believe isolation is the breeding ground for these. This is something the 500 environment helps you avoid.

The office space was one of my favorite parts of the program. It’s an intensely collaborative space where you can’t avoid cross-pollinating with creative and vulnerable minds on similar journeys. Pains. Lessons. Growth. Fundraising. Hiring. Firing. Emotional swings. Swapping stories. Friendship.

The level of intellect, curiosity, hustle and standard that permeates the 500 office and community is both contagious and addicting. I felt FOMO regularly when leaving the office. I knew that time spent elsewhere had less of an impact on my personal growth.

That said, there’s a clear downside to this setup: distraction. It’s easy to spend the day bonding with batchmates and not building your business if you‘re not disciplined. It’s easy to convince yourself the relationships are valuable (and they are), but there’s a direct impact on your bottom line for each hour you’re not heads down. As they say, balance is key.

There’s something to say about building a powerful network in a friendly, organic environment vs. one that feels forced. We know a lot more smart folks now than we did before the program and those relationships feel real as opposed to transactional.

We met dozens of operators and investors who came by for late-night chats and shared insights on their mindset and entrepreneurial journey with off-the-record candidness. And they were accessible. We connected with many of them personally who were genuinely interested in being helpful.

Two sessions that had a memorable impact on me were Gary Swart of Polaris Partners and Jess Mah of InDinero. They served as a strong reminder that we’re all human; that we all go through hardship. It’s the ones that don’t give up who win out.

From an evening chat with Wesley Chan of Felicis Ventures, an under-publicized fund with massive wins:

Support & Validation (or a punch in the face)

Confidence is a huge part of staying the course as an entrepreneur, and having a sounding board to let you know when you’re killing it (and when you’re fucking up) is invaluable. The 500 culture is exceptional at telling you like it is, no filter.

The 500 partners have seen hundreds of companies pass through the accelerator, so learning what other later-stage companies looked like at seed makes for an interesting perspective. It’s an implicit measuring stick and helps build confidence when you get praise and create a fire when you’re slumping.

You learn that the teams touting growth, getting press, raising large rounds are, again, just normal humans. Like you and I. Smart, hardworking people who muscled through the troughs. That’s it.

You leave 500 deeply believing this.

Building a company is a lonely journey. We got close with the 500 team who genuinely care about our success, and not just because they’re on our cap table. They care about our emotions, mental health and how much we’re enjoying the process. They know all days won’t be good ones. They invest in you ability to win long-term and they make that clear. I’ve never felt pressure to exaggerate numbers or disclose anything but the exact truth about the health of our business, my psychology, worries, challenges or concerns. It’s hard to put a price on that.

And although B16 is winding down, I feel like we’ll have that trust forever.

Last but not least: Fun

To my point above on enjoying the journey, we had insane amounts of fun. As a fellow batchmate likes to say, we burned the candle on both ends. I’ll tell this one in pictures:

After the program ended, a batchmate and I sat in my apartment reflecting on our experience. Best parts? Worst parts?

While this post summarizes the good, we were at a loss for the bad. Sure we can nitpick: mentor whiplash (major first-world problem), seating charts, scheduling, wifi and A/C issues (if I showed up to a meeting with you sweating, it wasn’t nerves I promise) but we had no substantial knocks against our experience — honestly. It was incredible.

That said, our conversation landed on a massive caveat:

You get out of the 500 experience (and other accelerators, by our guess) what you put in. Accelerators are kitchens, not restaurants. You have to get dirty and cut through the noise to find value for team and your business. One can easily go through an accelerator and get marginal value from it. That’s the asterisk next to most self-driven learning models and, well, life in general.

If you’re an early-stage founder, I highly recommend considering an accelerator, whether 500 Startups or another. If you think your business is beyond the ‘accelerator stage’, I’d reconsider (at least as it relates to 500). Much of our batch raised $500k-$1M+ prior to the program and some had up to 20 employees. I’d bet they feel similar to us about the experience.

Do your diligence on existing programs, talk to alumni founders and partners and decide which program is the best fit for your company.

While it’s hard to know today the affect 500 will have on our business long-term, it certainly feels like we made the right decision. It’s changed the way we think — and that lasts forever.

Thanks so much for following our journey 🙂 If you’re interested in joining 500, applications for Batch 18 in SF are now open. Apply here and let me know you applied.